This concert, featuring Carl Orff's Carmina Burana and Jonathan Dove's Arion and the Dolphin, will mark the beginning of a new era for Saffron Walden Choral Society, as we warmly welcome our recently appointed Musical Director, Quintin Beer.

Carl Orff composed a number of works for the theatre and concert hall, but he is chiefly remembered for his far-reaching contribution to music education and for his dramatic cantata, Carmina Burana, written in 1936. The text of Carmina Burana is a selection from a large collection of secular poems of the twelfth and thirteenth centuries, preserved in a manuscript at the Bavarian monastery of Benediktbeuren.

Music runs through the story of Jonathan Dove's Arion and the Dolphin, which begins with a singing competition in Sicily. Arion wins the prize, and this puts his life in danger: his newfound wealth excites the greed of the sailors who are supposed to be bringing him back to Corinth, and they threaten to kill him. They allow Arion to sing one last song, and the power of his singing attracts dolphins to the ship. At the end of his song, he jumps overboard, and one of the dolphins carries him to safety. So Arion’s musical gift gets him into trouble, but it is also his salvation.

The concert will also feature the percussion ensemble, O Duo & Friends. As both Carmina Burana and Arion and the Dolphin require a children's choir, we are delighted to welcome St. Catharine's College Girls' Choir to join us on this occasion. 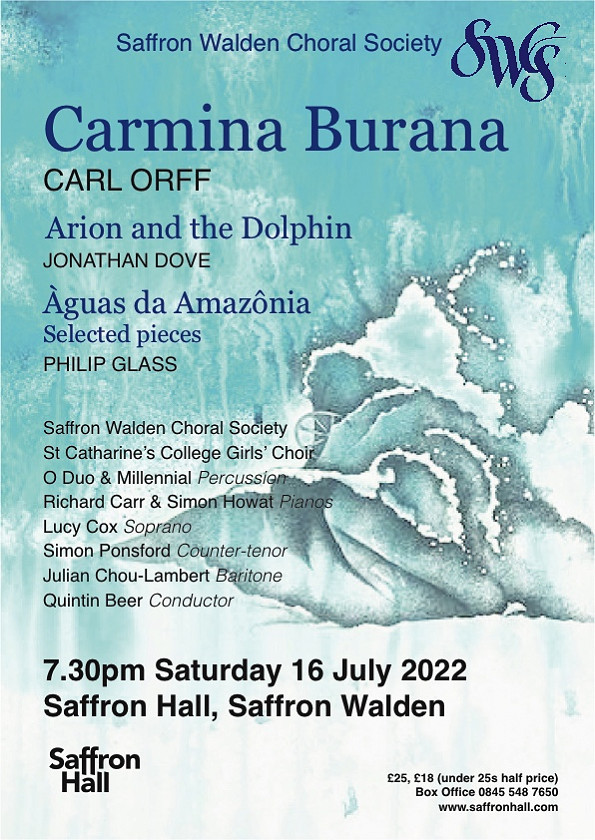