‘Away, O soul, hoist instantly the anchor.’ Vaughan Williams’s rapturous 70-minute A Sea Symphony (1910) takes the listener on a monumental voyage over all the waters of the earth. An exhilarating work for chorus and large orchestra, based on texts by Walt Whitman, it is by turns tempestuous, tranquil, stormy and sublime. This salt-spray masterpiece for chorus and large orchestra is preceded by songs from Ocean World. While celebrating the wonder of the deep, this musical also has a serious ecological message. Commissioned by the WWF in 1990, it tells the story of a female humpback whale and the challenges she faces as she journeys to her northern feeding grounds.

Those of us who were lucky enough to attend the concert in Saffron Hall on Saturday evening must have felt inspired by the high standard of performance throughout. The first half of the concert was memorable for the really splendid singing of the "SignuptoSing" Youth Choir and Thaxted Primary School who performed songs from 'Ocean World', a children's Musical written by Peter Rose and Anne Conlon. The songs describe the journey of a humpback whale and her calf from the warm southern coral reefs to the cold northern seas, and the music is wonderfully descriptive and appealing to young and old alike. The choral discipline of these young singers was outstanding, everything sung by heart with real conviction and confidence.

The solo items came off very well and special mention must be made of young Alliyah Haynes for her 'Turtle' solo. Pianist Richard Carr accompanied the choir most beautifully and narrator Shiona Luke provided the spoken links between songs with clarity.

Janet Wheeler directed the performance with her usual skill and clearly inspired these young singers who followed her every gesture. Would that all choirs would watch the beat so assiduously!

The Sea Symphony is scored for chorus, soprano and baritone soloists and a large orchestra. One of the problems facing a conductor of this symphony is the difficulty of  of balancing the choir with the orchestra, the latter often inclined to drown the former. Apart from the odd moment of brass over-enthusiasm, balance was generally very good in this performance. The singing was full blooded, the choir seemingly very secure and confident throughout. The opening is surely one of the most dramatic and stunning moments in twentieth century choral music, with the initial vision of the sea brought about through a wonderful and sudden key change.

Overall a fine performance of this wonderful work with some impressive and sensitive singing in the second and fourth movements and everyone excelling themselves in the difficult and thrilling music of the scherzo. The two soloists Gillian Keith (Soprano) and Ross Ramgobin (Baritone) added significantly to the performance,  the orchestra obviously knew the work well and the choir responded magnificently to the demands of the conductor. Janet Wheeler is to be congratulated on guiding the ship through stormy and calm waters with such serene authority. 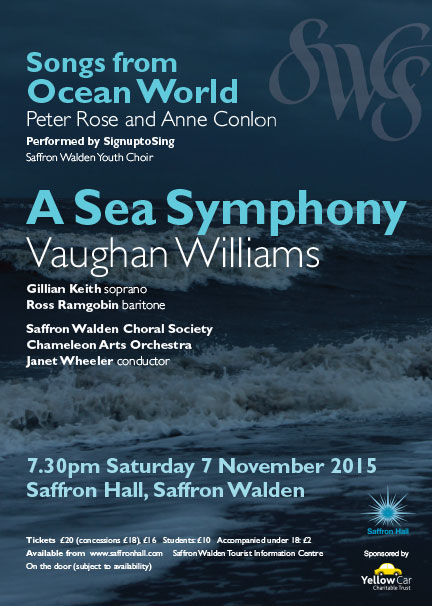