Full of youthful exuberance and irresistible melodies, Puccini’s miraculous Messa di Gloria was written when the composer was just 21, and shows him at his melodic best. It is paired here with Rossini’s equally tuneful Stabat Mater – containing the well-loved aria ‘Cujus animam’ popularised by Pavarotti - in an evening of sacred music at its most operatic. The superb line-up of soloists are all stars from the operatic and concert stage, and the Chameleon Arts Orchestra again provides professional orchestral support.

Rossini’s Stabat Mater is a work of enduring passion and commitment, attributes that were well matched at the performance by the Saffron Walden Choral Society directed by Janet Wheeler. The chorus shone in the unaccompanied sections, singing with clarity and focus as well as attention to dynamic detail. The chorus and recitative, with bass soloist Andrew Greenan, was well judged and affecting. The vocal quartet that forms the penultimate movement was sung by the chorus on this occasion with beautiful musicality.

Tenor, Miloš Bulajić gave a characterful account of the aria “Her weeping heart” but the tour de force was the cavatina sung by mezzo soprano Diana Moore responding to Rossini’s writing with great empathy. Soprano Laura Mitchell has a wide tonal pallet to draw on but had her work cut out rising above the over exuberant playing from the Chameleon Arts Orchestra. Sadly, sometimes she didn’t quite make it. Balance in Rossini’s somewhat heavy orchestration was a general issue in this performance leaving the audience somewhat aurally confused.

The work in the first half was Puccini’s “Messa di Gloria” – a piece of juvenilia not intended for public performance but rather to show the composer’s fluency in various technical musical skills. The title refers to the fact that the Gloria section takes up a large part of the work. Being written by the student Puccini, this work is heavily influenced by Verdi – some of the melodies would not have been out of place in Verdi (nor his great English equivalent - Sullivan). The musical characteristics we associate with Puccini from the operas are largely absent in this work. Well done to the SWCS for bringing it to us.

This performance of the Stabat Mater was very moving, particularly in its quieter more reflective moments. Those who chose not to turn out on this Lenten evening missed a treat. 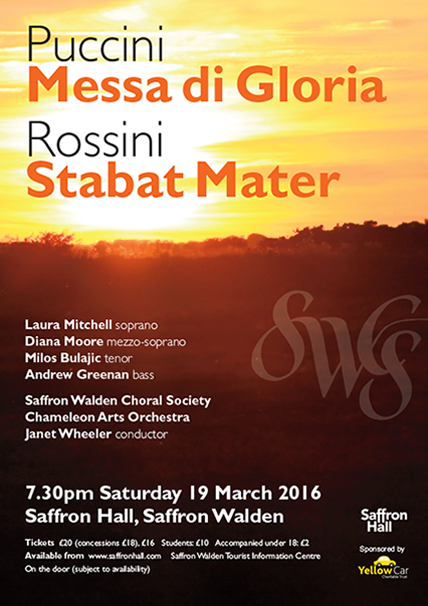